The MESSENGER API (defined in gnunet_messenger_service.h) allows P2P applications built using GNUnet to communicate with specified kinds of messages in a group. It provides applications the ability to send and receive encrypted messages to any group of peers participating in GNUnet in a decentralized way ( without even knowing all peers’s identities).

MESSENGER delivers messages to other peers in "rooms". A room uses a variable amount of CADET "channels" which will all be used for message distribution. Each channel can represent an outgoing connection opened by entering a room with GNUNET_MESSENGER_enter_room or an incoming connection if the room was opened before via GNUNET_MESSENGER_open_room. 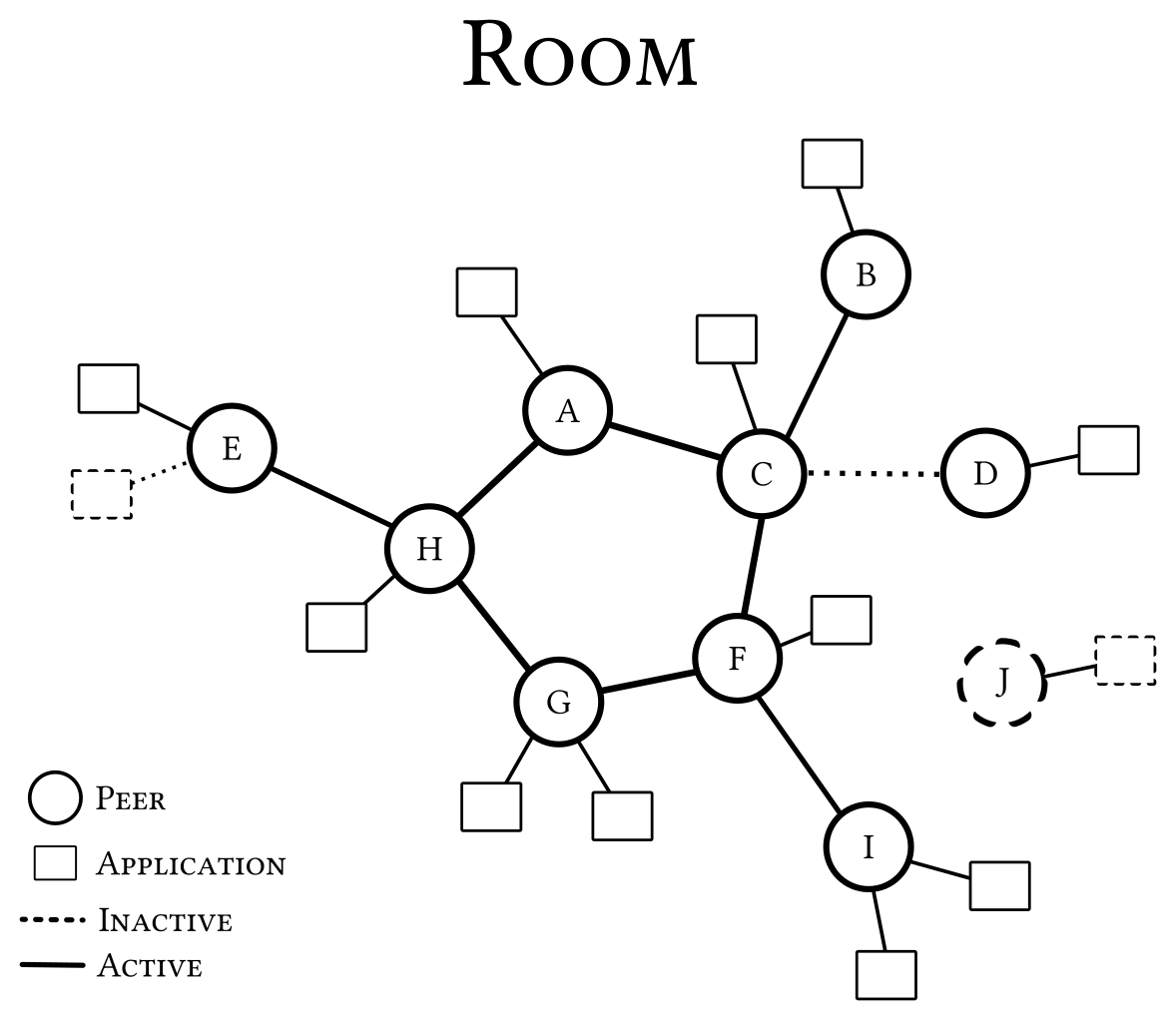 Entering or opening a room can also be combined in any order. In any case you will automatically get a unique member ID and send a JOIN-message notifying others about your entry and your public key from your selected ego.

The ego can be selected by name with the initial GNUNET_MESSENGER_connect besides setting a (identity-)callback for each change/confirmation of the used ego and a (message-)callback which gets called every time a message gets sent or received in the room. Once the identity-callback got called you can check your used ego with GNUNET_MESSENGER_get_key providing only its public key. The function returns NULL if the anonymous ego is used. If the ego should be replaced with a newly generated one, you can use GNUNET_MESSENGER_update to ensure proper chaining of used egos.

To send a message a message inside of a room you can use GNUNET_MESSENGER_send_message. If you specify a selected contact as receiver, the message gets encrypted automatically and will be sent as PRIVATE- message instead.

To leave a room you can use GNUNET_MESSENGER_close_room which will also close the rooms connections once all applications on the same peer have left the room. Leaving a room will also send a LEAVE-message closing a member session on all connected peers before any connection will be closed. Leaving a room is however not required for any application to keep your member session open between multiple sessions of the actual application.

Finally, when an application no longer wants to use CADET, it should call GNUNET_MESSENGER_disconnect. You don’t have to explicitly close the used rooms or leave them.

Here is a little summary to the kinds of messages you can send manually:

MERGE-messages will generally be sent automatically to reduce the amount of parallel chained messages. This is necessary to close a member session for example. You can also send MERGE-messages manually if required to merge two chains of messages.

INVITE-messages can be used to invite other members in a room to a different room, sharing one potential door and the required key to enter the room. This kind of message is typically sent as encrypted PRIVATE-message to selected members because it doesn’t make much sense to invite all members from one room to another considering a rooms key doesn’t specify its usage.

TEXT-messages can be used to send simple text-based messages and should be considered as being in readable form without complex decoding. The text has to end with a NULL-terminator character and should be in UTF-8 encoding for most compatibility.

FILE-messages can be used to share files inside of a room. They do not contain the actual file being shared but its original hash, filename, URI to download the file and a symmetric key to decrypt the downloaded file.

It is recommended to use the FS subsystem and the FILE-messages in combination.

DELETE-messages can be used to delete messages selected with its hash. You can also select any custom delay relative to the time of sending the DELETE-message. Deletion will only be processed on each peer in a room if the sender is authorized.

The only information of a deleted message which being kept will be the chained hashes connecting the message graph for potential traversion. For example the check for completion of a member session requires this information.

A member session is a triple of the room key, the member ID and the public key of the member’s ego. Member sessions allow that a member can change their ID or their ego once at a time without losing the ability to delete old messages or identifying the original sender of a message. On every change of ID or EGO a session will be marked as closed. So every session chain will only contain one open session with the current ID and public key.

If a session is marked as closed the MESSENGER service will check from the first message opening a session to its last one closing the session for completion. If a the service can confirm that there is no message still missing which was sent from the closed member session, it will be marked as completed.

A completed member session is not able to verify any incoming message to ensure forward secrecy preventing others from using old stolen egos.