The current GNUnet TRANSPORT architecture is rooted in the GNUnet 0.4 design of using plugins for the actual transmission operations and the ATS subsystem to select a plugin and allocate bandwidth. The following key issues have been identified with this design:

In order to address the above issues, we want to:

The new architecture is planned as follows: 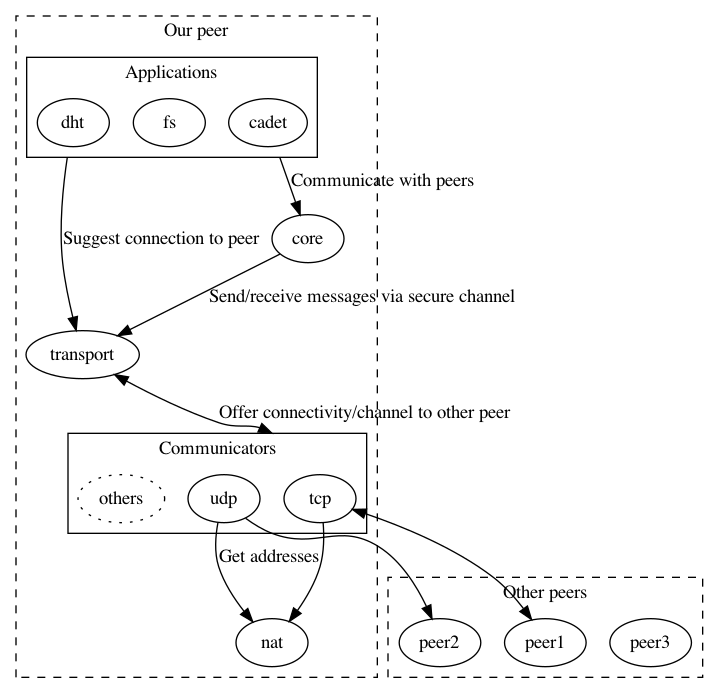 HELLOs change in three ways. First of all, communicators encode the respective addresses in a human-readable URL-like string. This way, we do no longer require the communicator to print the contents of a HELLO. Second, HELLOs no longer contain an expiration time, only a creation time. The receiver must only compare the respective absolute values. So given a HELLO from the same sender with a larger creation time, then the old one is no longer valid. This also obsoletes the need for the gnunet-hello binary to set HELLO expiration times to never. Third, a peer no longer generates one big HELLO that always contains all of the addresses. Instead, each address is signed individually and shared only over the address scopes where it makes sense to share the address. In particular, care should be taken to not share MACs across the Internet and confine their use to the LAN. As each address is signed separately, having multiple addresses valid at the same time (given the new creation time expiration logic) requires that those addresses must have exactly the same creation time. Whenever that monotonic time is increased, all addresses must be re-signed and re-distributed.

Each MQ envelope is always able to store those options (and the priority), and in the future this uniform API will be used by TRANSPORT, CORE, CADET and possibly other subsystems that send messages (like LAKE). When CORE sets preferences and priorities, it is supposed to respect the preferences and priorities it is given from higher layers. Similarly, CADET also simply passes on the preferences and priorities of the layer above CADET. When a layer combines multiple smaller messages into one larger transmission, the GNUNET_MQ_env_combine_options() should be used to calculate options for the combined message. We note that the exact semantics of the options may differ by layer. For example, CADET will always strictly implement reliable and in-order delivery of messages, while the same options are only advisory for TRANSPORT and CORE: they should try (using ACKs on unreliable communicators, not changing the message order themselves), but if messages are lost anyway (e.g. because a TCP is dropped in the middle), or if messages are reordered (e.g. because they took different paths over the network and arrived in a different order) TRANSPORT and CORE do not have to correct this. Whether a preference is strict or loose is thus dened by the respective layer.